Although there are other things to consider when calculating your Chaos Frame, this formula is the closest you can get to your true Chaos Frame without much work.

How do you 'Liberate' or 'Capture' towns?

Below is a visual guide that will describe each component on how to do this. Just for a quick overview, you need to know a unit's alignment and the morale of any given town you wish to liberate or capture.  Also, you can only do this when you are active in a mission and towns are currently in possession of the enemy army.

To determine the alignment of any unit you need to view the alignments of the characters within that unit. In Ogre Battle 64, all character within the same unit are either Lawful, Chaotic, or Neutral, unless you scramble characters often. They can range from being purely in an alignment (such as 0-10 C, 45-55 N, and 90-100 L), or in the middle of alignments (such as 11-34 C, 35-44 N, 56-64 N, 65-89 L). The 'average' of your unit is what you will use to determine if they can capture or liberate towns. Although I have yet to test this, I consider the unit leaders alignment the most important one when determining this.

How do I find out the Morale of a town?

You can find the morale, which is located under the town information, when you are active on any given map. When deciding to capture or liberate, the morale will show what kind of unit you should send. In the first example below, Norle has a morale of 80. Sending a Lawful unit (75-95 L) will result in a liberation! If you wish to capture, you would send a Chaotic unit (0-35 C) or Neutral unit (45-55 N). And in the second example, Sceni, it would be the opposite. Send a Chaotic unit to liberate, and a Lawful or Neutral unit to capture. Neutral units from 35-64, can liberate any town that has a 'medium' or neutral morale. 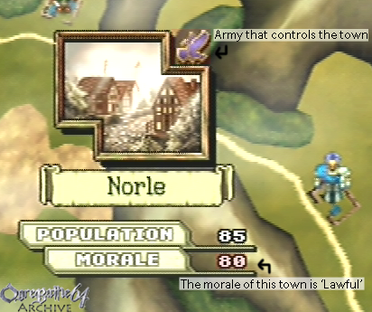 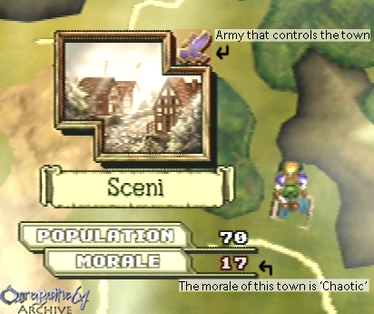 How do I know if I Captured or Liberated a town?

Every time you take a town you will receive a message from the unit leader. If they say, 'Liberated' the town was liberated, and if they say 'Captured' the town is then captured.

In some maps you will find towns that are 'green'. These towns are not owned by you or the enemy army. If you want to lower your Chaos Frame, then you should take these towns, because you can never liberate them. And if you want a high Chaos Frame, leave them alone. At the end of the mission they will become yours.
If the enemy army manages to recapture one of the towns in your control, this will lower your chaos frame. So once again, if you want a high Chaos Frame, then protect your towns.